In NSW current tenancy legislation allows landlords in the private market to end a tenancy without having to give a reason. They can do this by issuing a ‘no grounds’ termination notice – either at the end of a fixed term with only 30 days notice, or at any point during a periodic tenancy with 90 days notice.

This means renters are often scared to enforce their rights because they know they can get kicked out for things like asking for repairs or challenging an excessive rent increase. Make Renting Fair is a community campaign calling for law reform to end these unfair evictions.

The campaign so far...

Support for the campaign continues to grow. So far, Make Renting Fair has been endorsed by over 90 organisations – including community organisations, unions and faith-based organisations. Our petition has over 1,000 signatures (if you haven’t yet signed you can take action at rentingfair.org.au) and almost 700 people follow us on Facebook. We’ve recently held stalls at Surry Hills Festival and community day at Poets Corner in Redfern, and in November we talked to thousands of festival go-ers at the Newtown Festival.

In mid September the campaign was invited to participate in a cross party Parliamentary Briefing on the need for NSW tenancy reform hosted by Jenny Leong (Greens, Newtown), David Mehan (Labor, The Entrance) and Alex Greenwich (Independent, Sydney). With around a dozen Members of Parliament or their representatives in the room and a number of follow-up meetings organised for those who couldn’t attend on the day, the Briefing provided an excellent opportunity to start some real conversations with politicians from across the parties about the need to tackle the problem of unfair evictions.

In October the Victorian Government announced a range of reforms to its tenancy laws aimed at making renting fair. These include reforms working towards no more evictions without a good reason; allowing pets for renters; and capping rent increases at a maximum of one per year. The announced reforms are a big win for renters in VIC – but it’s also great inspiration for us here in NSW. Make Renting Fair supporters jumped on social media to let Matt Kean, Minister responsible, know that if VIC can do it, then so can NSW!

Is anyone taking notice?

There have been really positive signs that some in NSW Parliament are listening. Jenny Leong, the member for Newtown, last year launched a Greens campaign on renter rights and has long been a vocal supporter of law reform to protect against unfair evictions. At the end of October, NSW Labor announced a new policy platform strengthening renters’ rights. They promised a NSW Labor government would introduce significant reforms to end unfair (‘no grounds’) evictions and cap rent increases to once a year. This is an important step in the community campaign to making renting fair in NSW.

Watch this space as the Make Renting Fair campaign continues. If you haven’t already, please join us by endorsing the campaign, signing the petition, liking us on Facebook and sharing with your friends and colleagues.

Find our more and get involved at rentingfair.org.au. 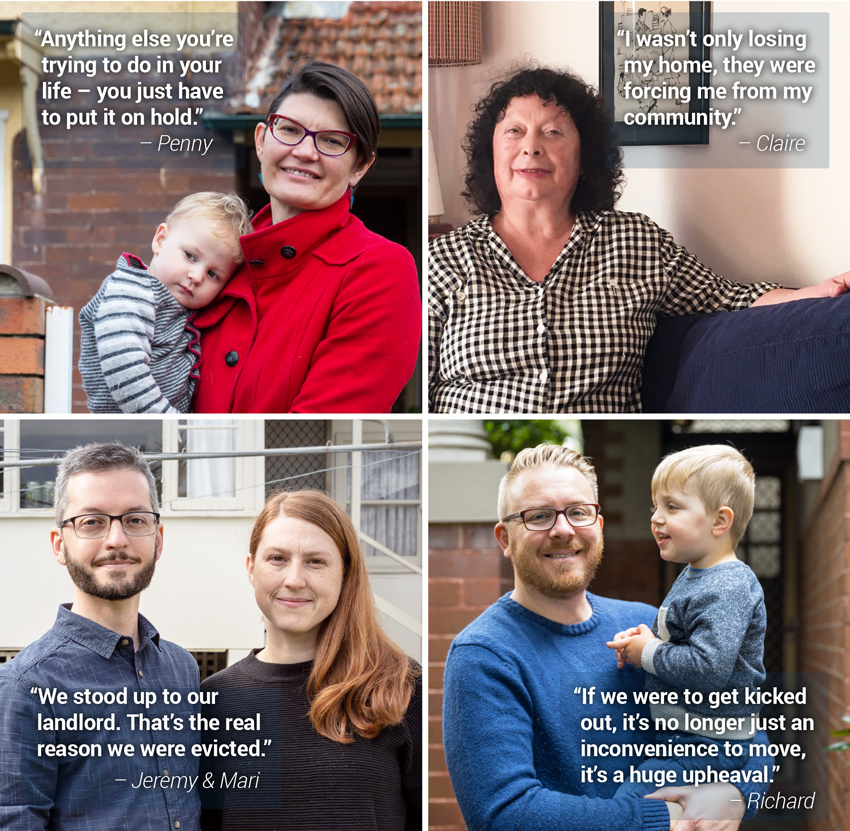