Media reporting of housing issues is a mixed bag. It certainly has gotten much better over time, and journalists and readers are becoming more educated. Over the last week there have been three instances we thought it was worth picking up on. 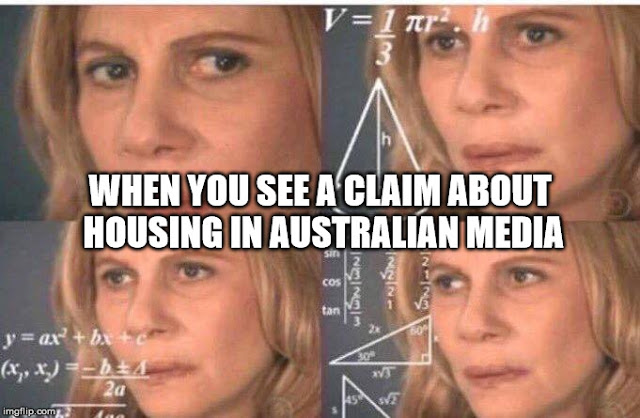 It was incredibly disappointing that in the same week that Choice, National Shelter and National Association of Tenants Organisations launched 'Disrupted' with excellent coverage across the nation, both of Sydney's main papers had a crack at our public housing tenants. And then the ABC dropped a clanger on Sunday.

First on Tuesday, the Sydney Morning Herald ran with a story based on an Audit Office report which amongst many other elements found that the repairs bill in public housing had risen to $413million in the 2017-18 year.

The story opens with the line: "Cleaning up rubbish when tenants move out and maintaining ageing properties are pushing up social housing bills, with new figures showing expenses have soared 50 per cent in four years."

Does the claim stack up?

First the costs. They certainly have increased over the last few years. It is noticeable that since the current maintenance contracts started in April 2016 the costs have ballooned. 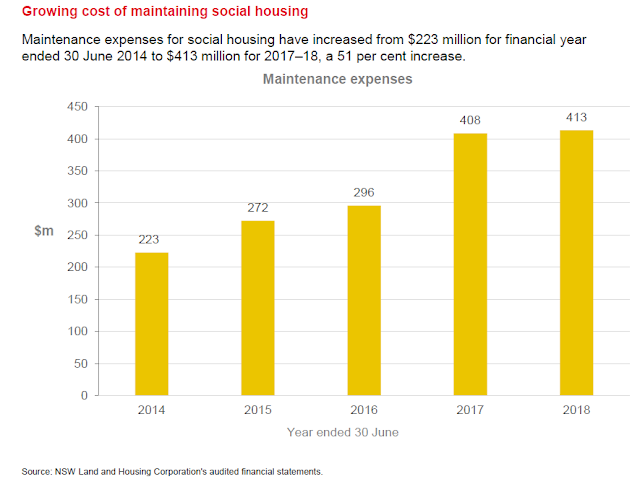 The Audit Office are pretty sharp, so they noticed the increase in costs, asked the Land and Housing Corporation for an explanation. From the report:

LAHC advise the following main reasons for higher expenses:
• more calls from tenants requesting maintenance as they now have direct access to the contractors’ call centres
• reduced call response time
• regular pop-up events with contractors on hand at social housing sites
• age of residential portfolio and the increasing costs to maintain
• higher costs due to damage and rubbish removal from properties when they become vacant.

So LAHC advised four other reasons for increased expenses before anything related to tenants potentially acting to create repairs costs. All four also have an element which can reasonably be argued to have increased costs since the contracts started. The most interesting is the apparent latent demand from tenants needing repairs done - the claim from LAHC is that they were not previously calling, or perhaps their calls not being picked up. This suggests that the maintenance bill should actually have been much higher in previous years, and what we see now is in part a catch up. This makes a lot of sense given NSW's infamous and ongoing shortfall in maintenance budget.

The higher costs due to damage and rubbish removal on the other hand doesn't necessarily follow the same path - is LAHC claiming tenants are causing more damage and leaving behind more rubbish? It appears that the Audit Office accepted these claims without any evidence, or at least the evidence is not included in the report.

It would have been worth asking for instance, if the damage and rubbish removal costs are before or after seeking the tenants contribution. These are ordinarily costs that the tenants' would be held liable for and money sought to be repaid. It is pretty important to check whether this is the remainder, or if in fact it is the gross amount – before tenants have paid any money back.

The Herald journalist also accepted the claim without question, and in our opinion unacceptably, promoted this last point to be the leading cause of the increase.

Perhaps vexed by the Herald stealing its traditional patch of giving oxygen to baseless claims about repairs, the Telegraph stole back attention on Friday with this headline.

The article is really talking about a trial in 20 units which will run over the next three years. Check out what we know about that here.

What we're more interested in is the headline and opening paragraphs. This is entirely misleading. First, applicants will not have to 'get a job'. It's not even a possible outcome of the trial. Even the most feverish anti-tenant commentators acknowledge there are many people for whom that's just not appropriate.

Second, no public housing homes are funded by tax-payers. As we've said before: not one dollar of money raised from taxpayers is paid to public housing tenants or otherwise credited to their rent accounts. Not one dollar. Tenants pay money to FACS, not the other way around.

This claim was not only untrue, but also needlessly mean and irresponsible. It has caused immense distress amongst public housing tenants who are now afraid that though they may be old, living with disabilities or caring full time for dependants or children they will be forced to either find employment or be forced from their home.

The ABC does it better

Oh Aunty, why are you in this list? Okay, they didn't engage in tenant-bashing, but they did pen this article on renting reform in Queensland (which sounds like it is going very well indeed – NSW is really starting to look left behind). 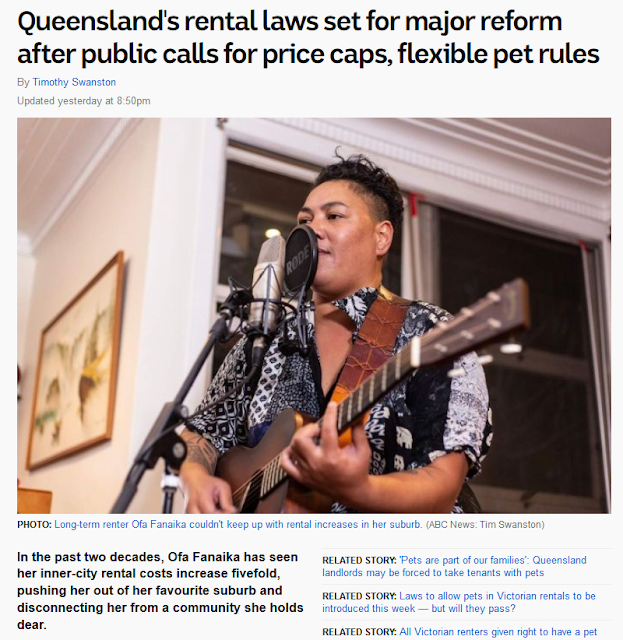 But the article originally included this tidbit:

"Last year, more Australians bought their seventh home than those who bought their first." Sounds legit – we all know that buying property is easy if you lay off the avocado. But...

The claim really doesn't stack up. Over the last year 115000 bought their first property to live in, according to the ABS. And in total the ATO reckons there were 20,000 people who owned 6 or more properties in 2015-16 (the latest data available – check it here).

While the property market is changing and we are seeing more landlords consolidating the number of properties they own is changing, it is very unlikely to have changed so dramatically in just two years. The number of Australian residents who are landlord (or more specifically, are disclosing rental income) has grown from 7.3% of the population in 2005-06 to 8.7% in 2015-16. People receiving rental income from 6 or more properties is almost literally still the domain of the 1% - from 0.06% of the population in 2005-06 to 0.08% in 2015-16. 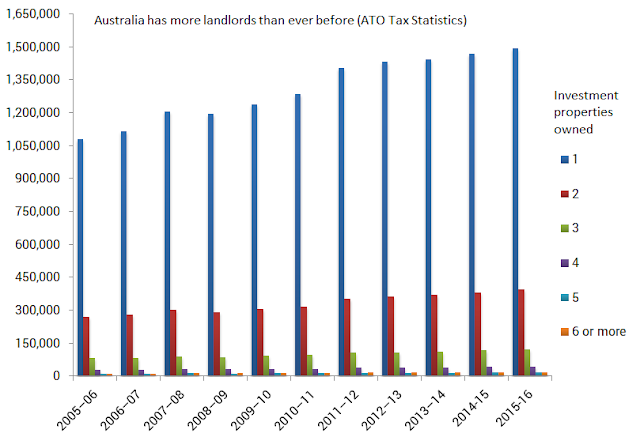 What may have happened is that someone looked at the 20,000 people who owned 6 or more properties and added all their properties up – collectively, they own more than 120,000 properties. This is higher than the number of people who bought their first property – but this is not the claim that was made, and doesn't tell us much anyway since they didn't all buy their properties in just the last year.

To their credit the ABC corrected the line to show the source of their information:

The Minister has not yet disclosed where he got his figures from, or whether they might be mistaken. Why would the minister want to draw attention to this? And why are we, with a clear interest in better renting laws calling attention to it?

It is for two reasons. First, because it is an attempt to set up greedy corporate landlords as a bogeyman to avoid dealing with the trickier issue that in Australia we have created millions of people as small-holding landlords who only have one or two properties. In many cases quite unwillingly, these landlords are being used to justify not implementing the necessary reforms for a fair renting system. It is much easier to set up a bogeyman – but in doing so we may end up implementing policy proposals which avoid dealing with the issues. One good example of this is a semi-frequent call to limit negative gearing to one property per person.

It also furthers the cultural idea that buying property is a good thing to do. Pushing back on that idea may be quite subversive in property-obsessed Australia, but it is necessary to get buying property back to it being at least a neutral endeavour.

By the way, people don't buy homes. They buy property. People make homes by living in them. Fact check that!

Update: The claim that more people bought their 7th property than their first has also been comprehensively factchecked by both The Conversation and The New Daily and found to be lacking by them as well. The ABC has deleted the reference entirely from the original article.