Do politicans vote with their property interests?

With recent news about Government ministers opposing no grounds reform, we thought it timely to look at whether politicians' votes are affected by their property interests.

Back in August 2014 Dallas Rogers wrote for The Conversation about how property-owning politicians might influence policy. He said:

It is important to note that research doesn’t show a causal link between property holdings and decisions of politicians. But it would be imprudent to assume prima facie that the property holdings of Australian politicians do not play a role in their political thinking, especially as this thinking relates to housing, taxation or even superannuation policy.

In April 2017 both the ABC and The Sydney Morning Herald ran stories about Federal politicians who owned property, many being landlords in the private rental market. They found that Australia's 226 federal MPs declared on the register of interests that they own 561 properties. You can view the ‘Register of Members Interest’ for Federal pollies here. These stories ran at a time when housing affordability was receiving daily coverage in the media and policies on negative gearing and capital gain tax were very much in the public spotlight. Now that these issues appear firmly cemented in the public debate, we might expect to see more articles in the run up to the federal election.

Anyone can check what properties NSW state politicians have disclosed by trawling through the ‘Register of Disclosures by Members of the Legislative Assembly as at 30 June 2018’. The equivalent for the Legislative Council is still hard-copy only but available to look through at Parliament House. Here is a summary. We have excluded two MPs who have not been required to make disclosures since they took their seats.

Unfortunately the information above is not the full story. There are possibly properties we don't know about: undisclosed because they are held by companies, trusts and self-managed super funds. Some, but not all, MPs do declare such properties.

Others keep them out of the public gaze through the disclosure rules. For example, it is clear that properties owned by the spouses of politicians don't generally need to be disclosed, but it is likely to cause some change in the way a politician votes. Whilst most MP’s don’t declare this information because it is discretionary, some (from across the political spectrum) do. At the same time, some assert that when deciding whether they need to declare a property 'income' is interpreted to mean 'net' income - which may end up meaning a negatively geared property held by a trust never needs to be declared at all.

Does owning property affect the way a politician votes?

In NSW we put this question to the test in September and October when Parliament was voting on the Residential Tenancies Amendment (Review) Act 2018. 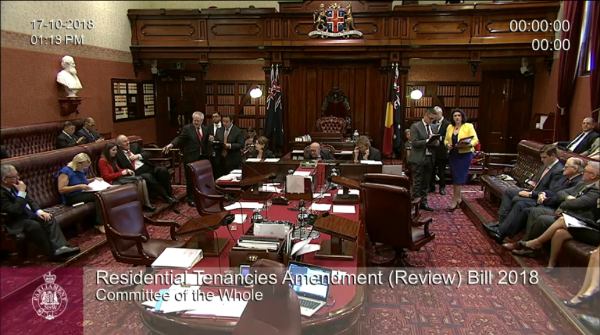 A vote in the NSW Legislative Council was very close to passing an amendment abolishing ‘no-grounds’ evictions. That vote ended up dividing along party lines with Labor, the Greens, and the Animal Justice Party supporting change and Liberal, National, Shooters and Fishers and Christian Democratic Party voting against change. The equivalent vote in the Legislative Assembly also divided on similar lines, with the three Independent MPs joining with Labor and the Greens. Counter-intuitively this means the party with the highest percentage of landlords amongst MPs, the Greens, voted for change.

It also means landlords did not uniformly oppose fair renting laws through ending no grounds evictions.  In fact, more than a third (18 out of the 42) of voting landlords in NSW Parliament voted to end unfair evictions- only a little less than the proportion of MPs overall.

So what is going on? We think the nine news story demonstrated it clearly – these decisions are made before the vote, inside parties, and it is there that any influence occurs. We know some within the Liberal and National Parties support ending unfair no grounds evictions – but they were overruled. This is why processes around conflicts of interest are so important!

But on the bright side we also know some landlord politicians do choose to vote for fairer renting laws. We might be optimists, but we also think this means our parties should question any assumption that landlords will never support a party that acts fairly. Just like people who rent their home, we believe there are a range of views. We are confident that, just like some politicians, some voters who are landlords can see past their own particular financial interests and support a fair, balanced renting system. Whether it is their family, their friends, or other members of their community - there is someone who is negatively effected by unfair evictions remaining as they are.