The Western Sydney Tenants’ Advice and Advocacy Service (WESTS) recently celebrated their 10 year anniversary at Western Sydney Community Legal Centre (WSCLC). They were pleased to be joined by Dr Geoff Lee, Member for Parramatta and Parliamentary Secretary for Western Sydney and Multiculturalism. 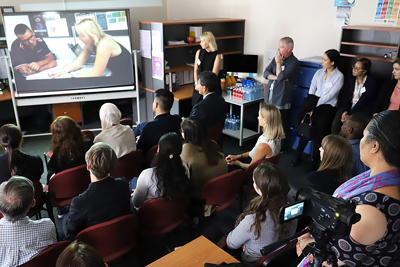 The celebration included speeches by Dr Robert Mowbray (former WESTS Tenant Advocate and now Tenants’ Union Project Officer – Older Tenants), Julie Foreman (Tenants’ Union Executive Officer) and Maria Girdler (WSCLC Director), and Franya Repolusk (WESTS Co-ordinator). There was also a special new video about WESTS – produced by WESTS Tenant Advocates – and of course cake! The event was organised by Franya and her staff Roya, Lauren, Tim, Victor, Fern, Ivana, Miriam and Amanda who put in so much effort on top of their busy schedules to prepare the event.

WESTS can be proud to have reached this milestone knowing that they have helped many thousands of renters over the years – last year alone they assisted over 3,000 new clients. In addition to phone advice and face-to-face advice in both Parramatta and Penrith, they conduct duty advocacy at the NSW Civil and Administrative Tribunal (NCAT) in Penrith, Parramatta and Sydney City.

The history of tenant services in Western Sydney extends back to at least 1986, when the Parramatta Auburn Holroyd Tenants Advice and Referral Service was funded as part of the Housing Information and Tenancy Services (HITS) Program. However, this program only last four years before being axed by then Housing Minister, Mr Joe Schipp.

To fill the void, in 1990, Uniting Church's Board for Social Responsibility (now Uniting) funded a tenants’ service for Western Sydney. It believed that tenant services were essential if residential tenants were to have a semblance of housing justice. WESTS was officially launched by Sir Ronald Wilson, President of the Human Rights and Equal Opportunity Commission and, at the same time, President of the Uniting Church in Australia. WESTS shared premises with Macquarie Legal Centre in Station Street, Harris Park.

In 2008, WESTS came to be auspiced by Macquarie Legal Centre, which is now part of Western Sydney Community Legal Centre.