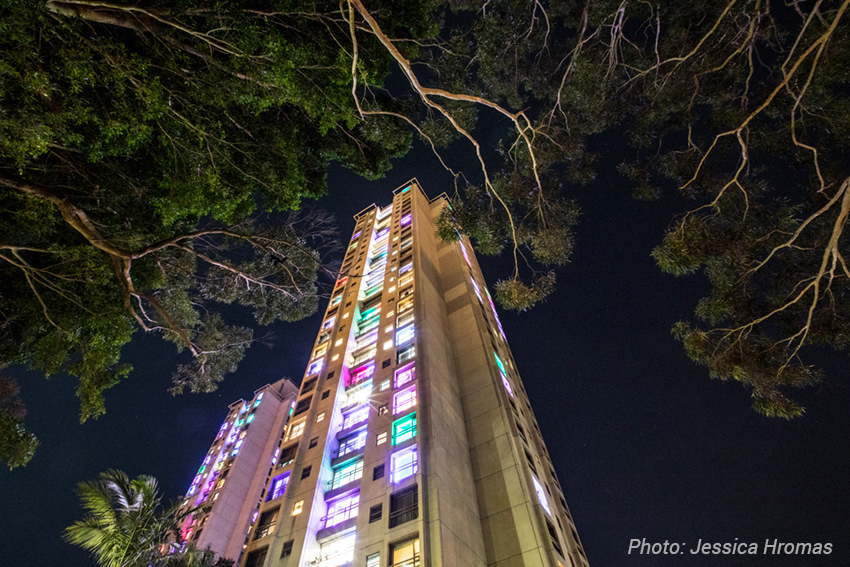 On the night of 9th September 2017, anyone looking across the south eastern suburbs of Sydney would have seen something magical; two tall grey towers lit up with a patchwork of multicoloured squares against the darkening evening sky.

It was the opening night of #WeLiveHere2017 and the lights were the windows of the two social housing tower blocks in Waterloo – Matavai and Turanga – that have dominated the southern skyline of Sydney since 1976, dramatic examples of Sydney’s brutalist architecture.

Waterloo is changing. In 2015 the NSW State Government announced the redevelopment of the Waterloo Estate, including six large tower blocks and several low rise dwellings. Some 3,600 residents – many of them elderly or people with a disability – will be relocated in the process.

#WeLiveHere2017 was a community arts project to put a human face to public housing, to encourage compassion, action, and, where necessary, resistance to the rapid urban development we are experiencing in cities across Australia and globally. Residents of the two towers were given “a thin track of LED – you can hardly see it,” says Brian, one of the participating residents. “They come with a remote control and a sheet explaining what the artists thought each colour could signify as your mood. So you can pick a colour to express a bit of emotion on the day. Or you can have it fading from one colour into another; I like a bit of fading myself.”

Brian lives on the 11th floor of Turanga. He moved here three years ago taking up an offer for a transfer from a community housing provider. He had been sharing a two-bedroom unit in Bondi; he now lives in a bedsit with Ruby, his seven-year old kelpie. “It’s small but it’s handy to everything – shops and doctors, the park for Ruby. It’s definitely my home. I feel safe and secure.”

Brian did not know when he accepted the offer that redevelopment was being planned for the Waterloo estate. He found out 6 months into his tenancy. “I was shocked really. I painted the unit when I first moved in, I thought ‘Oh well, I shouldn’t have done that.’ But after a while I was a bit resolved to it.”

“What cheesed me off about the whole thing,” says Felix, another participating resident, “was that they weren’t being honest. They claimed this development was just because of putting in the new Waterloo railway station. But when you look at the plan it’s a vast development. Which is fair enough. You just wish they would tell you the truth.”

Felix came to a bedsit on the 19th floor of Matavai from a boarding house five years ago, with his poodle Maltese terrier cross. “It’s great here. Everyone is over 55 years so we have no trouble. It’s a nice little community. I’ve got some friends here. We look after each other. That’s the saddest part of having to move, the break-up of the community.” It is hoped that residents can move within the estate and stay connected.

Neither of them needed much convincing to be part of the project. “Clare and Carolina, the two girls who organised it, were downstairs one weekend grabbing people as they came in asking whether they would like to be involved in this project putting coloured lights in your window,” says Brian. “Because they are going to be pulling it down. I think the idea was to state that there are a lot of people living here. You pass these tall buildings all the time – I’ve known them for a long time in Sydney – and you don’t give them another thought.”

“I think it was to get some media,” Felix says. “The media usually does bad reports about this place ‘suicide towers’. We’re just ordinary people. It’s not about trying to stop the project. Like I said, I saw the plans and it looks great. It was just to get some attention.”

“We had an opening night on the green” says Brian. “We had a smoking ceremony. It was a good community feeling. A lot of people here you don’t really talk to much. I’ve been here three years and I still come across people I’ve never seen before. It’s certainly meant I’ve talked to more people in the building.”

Neither of them knows in detail what the process or time frame for relocation is. “They haven’t released any master plan or anything like that yet,” says Brian. “Just last week they said they are not going to be relocating anybody till after 2018. But they are demolishing the block on the corner of Raglan Street for the new Waterloo railway station. I think they’ve started to move people from the southern end where the two and three storey walk up flats are; they are 1940s, 1950s and a lot more run down. I guess the towers will be last of what they’ll do. They’ve said most people will be able to move into a new place. They haven’t said anything about what that might be, but I guess there will be a lot of studios still. I suppose they might not give you much option in the first instance.”

The residents have been told that they will be able to come back and live in Waterloo if they want to when the project is completed. But “It’s a 20-year project and I may be dead in 20 years,” says Felix, “so coming back here…it’s immaterial. We get to keep the lights once the project is over,” he said, smiling. “Use them every Christmas!”

FACS Housing have said that it is the intention for the majority of tenants to be able to move from their current homes straight into the new social housing in the area.

You can also donate to the #WeLiveHere2017 crowdfunding project. 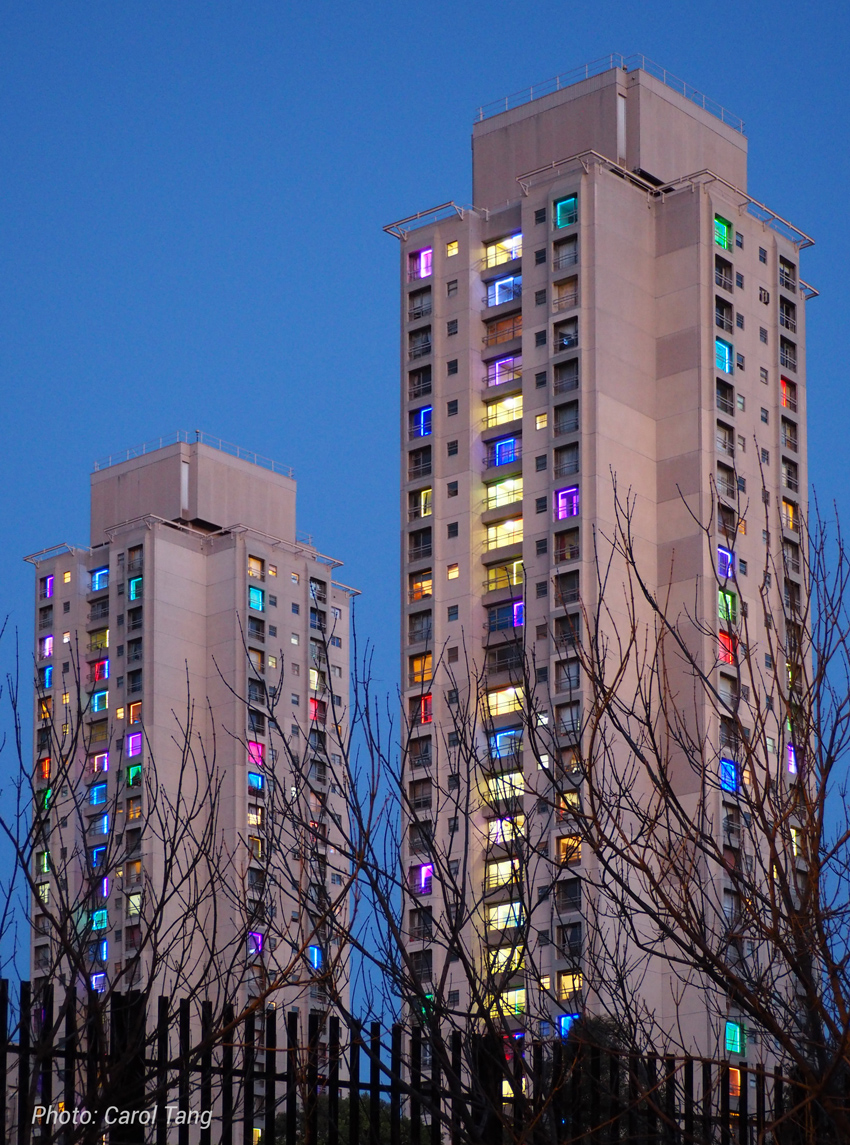