Theresa May shows Gladys the way on eviction reform

Theresa May’s government in the UK has shown that supporting a fairer, balanced renting system is possible for conservative governments.

Last week May and Housing Minister James Brokenshire announced that legislation was to be written to end unfair ‘no grounds’ evictions. Landlords will no longer be able to end tenancies either at the end of a fixed-term or outside a contract period without giving any reason at all. Instead, there will be a list of reasonable grounds where although the tenant has not breached the lease, the landlord will be able regain possession of the property. 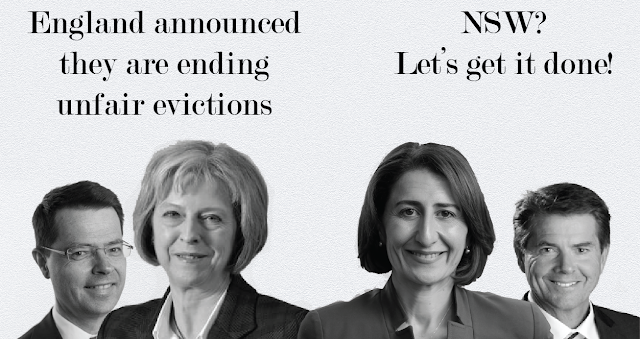 Reasonable grounds will be determined through consultation but may include a landlord wanting to move back in to the property or carry out major renovations. A landlord or a new owner will still be able to regain possession where the tenant has breached the lease terms.

These are nearly identical proposals to the reforms sought in Australia by the state-based Make Renting Fair campaigns and tenant representative groups. Progressive parties in most states as well as New Zealand have already accepted the need for reform. Victoria has largely implemented the change and both Queensland and ACT are looking likely to move soon. With the UK now joining the 21st century, Australia will soon be the only Commonwealth country still using ‘no grounds’ evictions despite inheriting the concept from England.

In NSW last year Premier Berejiklian’s government declined to implement the reform. But perhaps in a new term they can take inspiration from their British counterparts.

Prime Minister May said in her announcement that the reform will give tenants ‘the long-term certainty and the peace of mind they deserve’. Minister Brokenshire also talked about the stability that change will bring.

Their language shows that neither side of politics should feel apprehensive about making things fairer for tenants. Conservatism in the Menzies tradition was about giving people a stake and a sense of ownership in their community. Now tenants are the forgotten people - refused the opportunity to feel the connection because of the instability caused by policies like no grounds evictions.

Current Energy and Environment Minister Matt Kean MP indicated his willingness for reform as Innovation and Better Regulation Minister in 2017 when he told the Herald that "no grounds evictions, retaliatory evictions, all these things are currently undermining renters' rights in NSW”.

However later Kean noted that the government did not feel there was sufficient evidence for change. So what evidence did the British government rely on? The primary reason the government has been giving is that no grounds evictions have repeatedly been found to be the leading cause of homelessness amongst families.

In New South Wales, we have experienced rapid growth in homelessness – 37% in 5 years, much faster than any other state – and the Premier has made a commitment to reducing street homelessness by 50% in just a few years. Ending no grounds evictions would make that task significantly easier.

Even agents in the UK have begun to realise that blocking reform leaves them on the wrong side of history - with one, David Alexander, describing the reform as "long overdue" and noting that industry resistance to reform is often without merit. Referencing Scotland's reforms to no grounds evictions in 2016 and reform of fees tenants could be charged in 2012 Alexander said "despite some opposition to these changes at the time they have all been introduced and the [private rental sector] has not collapsed or disappeared."

Giving tenants a greater sense of belonging to their communities, and preventing homeless, with no impact on the state budget? Theresa May has shown Gladys Berejiklian and her new Innovation and Better Regulation minister Kevin Anderson one way to make a big statement in her first term as elected leader of the state. The more than 2 million tenants across this state also deserve the stability and piece of mind now being promised to English tenants.