As part of our relaunch of the Make Renting Fair campaign, we're building a new website. For the site, we're collecting a range of renting stories from various renters across NSW, to put a human face to some of the policy issues we're campaigning on. Riki is a renter who was generous enough to share their renting story and photograph with us. If you're at all interested, please consider sharing your renting story with us - especially if you're happy for a photo of yourself to be included with that story. Stories can be long or short, about any element of your renting experience, and are immensely valuable to our campaign to Make Renting Fair in NSW. 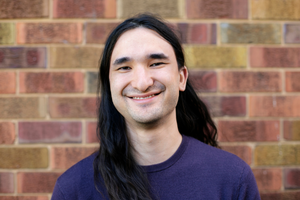 I lived in a sharehouse in Newtown for about three years, one of those few townhouses that had not yet been renovated or gentrified, and so was in significant disrepair. When people would come over, we would tell them that it was cheap rent, and they would immediately understand why. The single bathroom for the four-bedroom house had no sink, so you had to wash your hands or brush your teeth in the bath-shower combo unit or go over to the kitchen. The stairs were steep old stairs, with a broken banister and old, loose carpet, which many housemates would slip on and fall. (I did not, but I am as nimble as a gazelle.)

During one especially eventful week, I waged a war against the rats that infiltrated the property at first through a large hole near the back door, then through a small hole in the kitchen floor, then through new holes chewed out from the crawlspace beneath the living room floorboards. A few bricks blocked the back door hole; duct tape sufficed momentarily for the kitchen hole. After a brief flirtation with crack sealant, I surrendered to the rats, realising that the house was too old and too poorly maintained for me to win.

The roof above my bedroom was rusted through, so every time there was heavy rain, water would pool in the ceiling-space and drip down into the room. One of the other bedrooms had a black mould problem (likely stemming from the same roof problem) that many successive tenants had addressed by painting over the mouldy areas. After one particularly bad storm, I requested repairs to the ceiling and roof. A handyperson was sent out and gave a quote to the real estate agent, who ordered repairs only to the ceiling – not the roof – presumably because the dangerous repair work to the roof was too expensive. This was despite the fact that leaving it unrepaired would lead to further structural damage, even spilling over to neighbouring properties!

The place was much cheaper than nearby places, with tenants usually being students and others on income support payments who could not afford most other properties in the area. The implicit understanding between tenant and landlord for places like this is that the tenant gets cheap rent and limited oversight in exchange for accepting a lower standard of repair and maintenance. We would carry out basic repairs ourselves, and we learned to live with the state of the house.

The precarity of so many sharehouse arrangements gives agents and landlords so much scope to exploit tenants. When agreements aren’t crystal clear, and when one side has so much more power than the other, it will barely ever come down on the side of the tenant in the end. I know tenants get exploited and mistreated even when the law is on their side, so for sharehouses like ours we felt like we had no chance.