The Federal ALP conference is happening in Adelaide at the moment, and one of the big early announcements was a plan to build a lot of 'affordable' housing. This can probably be treated as the first big housing announcement of the coming election campaign. Check it out here.

It has been met with near-rapturous support from community housing providers and their supporters, like the Everybody's Home campaign. Others, like ACOSS have been more circumspect. And some on twitter have raised some concerns. Let's dig in to what the policy is, and what we might expect to deliver. 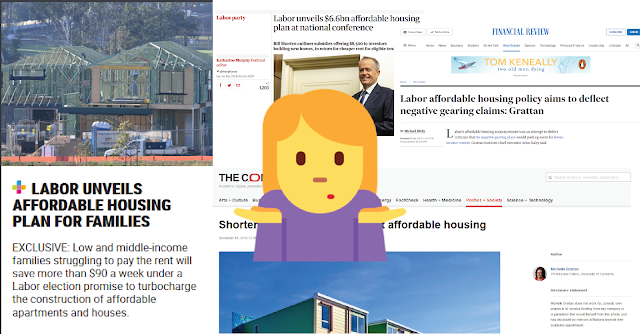 At its heart, this would be a reboot of the National Rental Affordability Scheme launched in 2008 by the then ALP government. Originally intended to create 50,000 'affordable housing' dwellings, the program was ended in 2014 with less than 40,000 properties either delivered or approved. The first dwellings built are coming to the end of their 10 year commitment this month, making this announcement from Labour timely. This NRAS 2.0 follows a similar model, scaled up to creating 250,000 'affordable housing' dwellings, though with some notable exceptions.

*It is open to the investor to exit the scheme at any time without penalty (apart from no longer being paid the subsidy) and we are aware of some instances where they did, or where the property stopped being eligible for the subsidy. It is unclear whether the proposal will operate similarly.

While a commitment to addressing housing issues is welcome, this is a limited model in a number of ways. There may be good reason to doubt whether it will deliver the 250,000 dwellings promised, and whether 80% of market rent is any kind of good way to ensure the dwellings are actually affordable.

The subsidy is very generous – anywhere on market rent of $815 or less receives more in subsidy than they give up in discount. At lower rents (anything below $407) the owner receives more than double the discount.

By closing access to private investors Labor are clearly hoping for more 'institutional investors'. This does not mean not-for-profit housing necessarily, nor necessarily better-behaved landlords. Just under half of the current NRAS properties are managed by for-profit providers.

There are a few obvious paths to funding. The federal National Housing Finance and Investment Corporation acting as a bond aggregator might lend to community housing providers for them to build and operate "NRAS 2" properties directly. The subsidy from this proposal would make the financial viability of those loans much easier to meet.

Inclusionary zoning models of the type able to be required under planning mechanisms like SEPP70 are also likely to utilise the proposal. Property developers in areas using inclusionary zoning rules will need to set aside some housing in large developments for affordable housing, and this payment will in many cases more than repay the lost revenue from that requirement. That's not an excellent result, as it is merely cost-shifting from the private sector to the public sector.

It is also very likely to form part of for-profit build-to-rent models because it will make those development propositions much more attractive.

There is a big question mark then over how many properties will actually be built. Labor promises to deliver 250,000 dwellings, but they aren't building them – the private sector is building. Labor has flagged the return of the National Housing Supply Council – a very welcome move – to help make sure properties are delivered in areas of need. But limiting properties to particular areas, and particular investors, means it is less likely that a match will occur and the right investor will be able to build in the right location. Will this limit how many properties actually get built?

What else can Labor do? Frankly it is an indictment of Australia's housing policy environment that they don't seem to be considering a large public housing build. Recent AHURI research demonstrated how much more sensible a publicly run housing program is, being by far the most cost-effective approach. And after development costs, directly running public housing is already cheaper than the rent. So why pursue such costly approaches?

In large part, it is because of a collective decision for an ongoing, bipartisan and cross-sectoral approach to housing which restricts access to social housing and casts its provision as welfare or even charity. While it is perhaps most enthusiastically pursued by conservative politicians, it is perpetuated by many in the not-for-profit housing sectors from advocacy to academia. One of the key ways this happens is by distinguishing 'affordable' housing from 'social' housing mostly along income lines. Because 'affordable' housing is only to be delivered by non-government organisations, this means that the non-government part of social housing can be subsidised by higher rents collected in affordable housing, but the government part cannot.

Consider that if instead social housing eligibility was opened back up to moderate incomes the cost to both construct and maintain would become much easier to manage. This is far better for all residents. The need for a complicated model such as 'affordable' housing would disappear, as would the stigma attached to social, and particularly public, housing. This is not an easy shift, as it would be important to ensure those on the lowest incomes aren't jettisoned, but with commitment it could happen.

Public housing has many advantages over the private market – it can be built where it is needed, without having to wait for the private sector to determine market conditions are favourable. It can be built in the type most suited – both dwelling structure and size – to the local conditions, rather than to what works out best for an investment manager. It has disadvantages too – shared with other social housing providers – of being a large bureaucracy that can struggle to respond to individual needs and often has nothing to offer tenants in being part of decision-making processes.

What is needed is a real conversation about the ways in which Australia can be housed, and a real vision for our housing system. Who can deliver that?