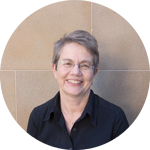 While there is still much to be done to improve housing rights for renters and in particular Aboriginal renters, it is important to recognise those who have worked hard to make a difference. Ruth Simon is one of these people and her story is of a true champion for housing justice.

Ruth is the Coordinator of Dtarawarra – the Aboriginal Resource Unit for the network of Tenant Advice and Advocacy Services (TAAS). In 2014 she received a Lifetime Achievement Award for her contribution to the TAAS network.

For well over a quarter of a century Ruth has dedicated herself to ensuring justice for Aboriginal people through her work, both paid and unpaid. She has initiated or managed a range of initiatives promoting access to education, secure housing, health and employment. Always, Ruth has understood how these issues interrelate and how they all must be addressed to create positive outcomes for Aboriginal people.

Her current work with the TAAS network began in 2000. This involves:

She is also involved in directly supporting Aboriginal tenants to maintain their tenancies. Ruth says “without proper shelter you can’t go to the next level.”

Ruth is an inspirational adult educator and has worked on materials for training in community services advocacy, to ensure it is culturally appropriate for Aboriginal tenancy staff. Ruth’s commitment to presenting cultural awareness training has meant that for many years, several times a year, she has presented such training for tenant advocates generally.

As part of her role in the network, Ruth advocates for Aboriginal tenants who, in most cases, are at risk of being evicted from their homes. She has had a high rate of success and without her advocacy and negotiation skills many of these already disadvantaged people would now be homeless.

She is able to paint a picture of how the tenants’ life situations got them to the position they are in and to negotiate for manageable repayment of any rental arrears.

Ruth extends her concept of care to providing tenants with contacts and advice about services which could assist in other areas of the tenants’ lives. She still receives calls and invitations from community members whose lives were turned around by her advice & support when they were at their most vulnerable.

Ruth is passionate about Aboriginal control of Aboriginal Services and has taken on, often at personal cost, mentoring TAAS staff and auspicing Aboriginal TAASs to ensure they remain in Aboriginal management, staffed by Aboriginal workers.

Before Ruth’s involvement with the TAAS, she was facilitating access to justice, education and employment for Aboriginal people in NSW. A sample of her achievements in this regard include:

Ruth’s commitment to ensuring access to just outcomes for Aboriginal people means that she always goes the extra mile. With many of the projects she has been involved with, she has made herself available 24/7. She does not distinguish between her time and the community’s time – as far as she is concerned, her time is their time. To every project Ruth brings her professionalism, her humanity and humour.

I have personally learnt much from Ruth about advocacy, communication, education and the issues facing Aboriginal people.