The Limits of Rights and Protections: Housing as an Essential Service

This article co-authored with Mark Riboldi of Community Legal Centres NSW was published in the September issue of Parity, "Marginal Housing: Where to From Here?". We are pleased to have been given permission to republish here, and encourage you to consider subscribing to Parity for coverage of all aspects of homelessness; its causes and consequences and the policies, programs and services developed to prevent, respond to and, end homelessness.

Public policy relating to renting and tenancy is typically approached through two competing conceptions: consumer protection and human rights - are we regulating an economic exchange or ensuring that everyone has a roof over their heads? The problems resulting from these, governments resistant to enforceable rights mechanisms and not all tenancies being commercial transactions, mean too many people are denied adequate housing. Perhaps it’s time to explore a different way of framing this issue: through the lens of access to housing as public service provision. 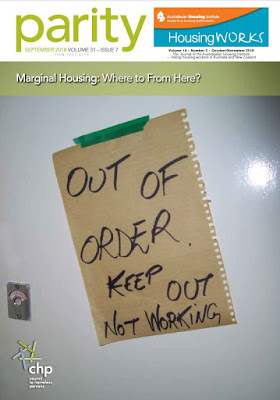 Governments across Australia tend to approach tenancy as a subset of consumer protection, with Residential Tenancies Acts across the country being in the consumer affairs portfolio or equivalent. This implementation is inconsistent: under Australian consumer law, most residential tenancy landlords are not recognised as being ‘in trade or commerce’. At the same time, many marginal rental landlords, such as boarding or rooming houses, are recognised under the consumer law, though enforcement is rare.

The way renting is regulated through consumer affairs typically misunderstands the basics of the relationship between landlord and tenant. It generally conceives of two parties with roughly equal incentive coming together to create a contract. In a parallel example, a customer who walks into a TV shop will happily walk back out again without a TV if the price is not right, the product not suitable, or the salesperson not helpful. In terms of renting, landlords have the same financial incentive to make a ‘sale’ as the shop-owner, however tenants have a much greater need for shelter than the prospective TV watcher does for the latest episode of The Bachelor. This imbalance diminishes the ability for landlords and tenants to negotiate on equal terms and therefore to make renting fair government must intervene in the ‘market’ interactions.

Another problem caused by treating housing as a market place is the competition created between multiple parties seeking to live in a particular home. For potential ‘winners’, the lines of 30, 40, or more applicants creates the feeling of intense competition. But the reality is it only ever takes another applicant to be richer, whiter[i], or otherwise less of a ‘risk’ than you, for that home to remain out of reach. This environment pushes the ‘losers’ into increasingly substandard accommodation.

In comparison to this typical legislative approach, most housing advocates take a rights-based approach to housing, building on the right to housing enshrined in the Universal Declaration of Human Rights, and more fully explored in the International Covenants on Economic, Social and Cultural Rights[ii] and Civil and Political Rights[iii].

A key component of the right to adequate housing not implemented in Australia, which is not at all addressed by a consumer affair approach, is legal security of tenure. The Committee on Economic, Social and Cultural rights explains: “Notwithstanding the type of tenure, all persons should possess a degree of security of tenure which guarantees legal protection against forced eviction, harassment and other threats.”[iv]

With Australia’s general lack of constitutional or legislative rights frameworks, these rights to housing suffer from being neither recognised nor legally actionable in Australian jurisdictions, except in limited circumstances for public housing tenants in Victoria and the ACT. An unenforceable right is barely a right at all, and it’s questionable how many people think of the right to housing in the same way the think of the rights to freedom of assembly or speech. Framing issues around rights is additionally challenging: advocates and experts tend to talk about rights as individual objects existing on paper, created by lawyers; this is dissonant with the everyday reality of people’s lives, and from the right to housing as something that is innate or enacted by caring communities. From a housing advocate’s point of view, shifting both public opinion and government policy from a consumer affairs to a human rights framework may be a mountain too high and steep.

Another problem is that public discourse and campaigning around ‘renters’ rights’ in Australia focusses heavily on people in more formal residential tenancies – namely standard arrangements between landlords and tenants, typically brokered through real estate agents. Far less attention is given to the rights of residents in other forms of renting, particularly marginal housing forms like boarding and rooming houses, lodgings in private residences, public housing and residential parks tenancies. In every jurisdiction except the Australian Capital Territory multiple forms of marginal housing are not covered by legislation. Even in the ACT, effective coverage is limited.

This unfortunate phenomenon is understandable. Residential tenancies impact a broader proportion of the population, affecting social groups with greater social capital and power than the frequently more marginalised residents of, for example, boarding houses. Broad support is important for successfully shifting public policy and governments, which tend drag behind both academic consensus and popular opinion. In terms of renters’ rights, this makes it crucial for advocates to frame the issue in a way that is inclusive of marginal renters.

To achieve this, and to break the dissonance between housing as consumer affair or human right, an alternate conception may be to refocus on housing as the provision of an essential service, in a similar way that we look at education, health and transport. In the Australian context, all of these to varying degrees operate in a mixed public service / private provider policy environment, where public debate revolves around how much should be accessible free-of-charge. Such an approach may be more palatable to lawmakers turned off by the concept of human rights enshrined in legislation.

Importantly however, it also comes without the degradation of purpose that can accompany pragmatic solutions to thorny issues, such as the current trend towards not-for-profit housing as a response to a public housing approach governments have underfunded into failure.[v]

Recognising housing as an essential service offers a number of advantages in terms of advocating for improved conditions for people in marginal housing. While there is fierce political debate about how best to supply essential services, no credible decision-maker in Australia would be willing to argue that simply having a lower income should exclude a person from having access to clean water, healthcare or a high school education.

A public service approach would necessitate state and federal Ministers for Housing to ensure that the housing supply chain was functioning properly, and that the ultimate use of the shelter was regulated appropriately. This would require a realignment of the ministers currently responsible for planning, social housing and renting regulation.

Recognising housing as an essential service means sensible legislative reform to ensure that laws around renting are no longer a patchwork of coverage with cracks for marginalised people to fall through. Under this framework all renting contracts, whether an inner-city boarding house, a lodging in a family home, or a mainstream residential tenancy would then include:

· protection from unfair and arbitrary evictions, and

· requirements that homes be of adequate comfort and safety, and

· effective and accessible dispute resolution mechanisms, including of eviction decisions.

Housing as essential service cuts across the prevailing legislative framework of renting as commercial transaction. If we can reframe housing as an essential service, we will be less likely to accept the current restrictions to access, the arbitrary cut-offs through evictions and the overpricing of supply, particularly in the informal sector. While Australians are generally accustomed to private entities delivering public services, people are becoming increasingly aware that the corporate ‘efficiencies’ and ‘choice’ provided by profit-driven entities do not necessarily equate to quality services, take for example recent criticisms of the private health insurance rebate, the underperformance of for-profit superannuation funds, or the concerns about unscrupulous players in the aged care sector which sparked the recent Royal Commission.

Reframing housing as an essential public service will be a challenge, but it’s clear that we need to find effective ways to shift the political discourse and legislative framework away from housing and renting as simply consumer transactions. Rather than a move away from a rights-based approach, we suggest exploring a different way of advocating for these rights that is both inclusive of marginal renters and builds on the existing support for a various public and community delivered services as foundation stones for fair, vibrant and inclusive communities.

[iv] Committee on Economic, Social and Cultural Rights: General comment No. 4: The right to adequate housing (art. 11 (1) of the Covenant) (1 Jan 1992). Available at http://tbinternet.ohchr.org/_layouts/treatybodyexternal/TBSearch.aspx?Lang=en&TreatyID=9&DocTypeID=11