END_OF_DOCUMENT_TOKEN_TO_BE_REPLACED

Power to the people at a reasonable price 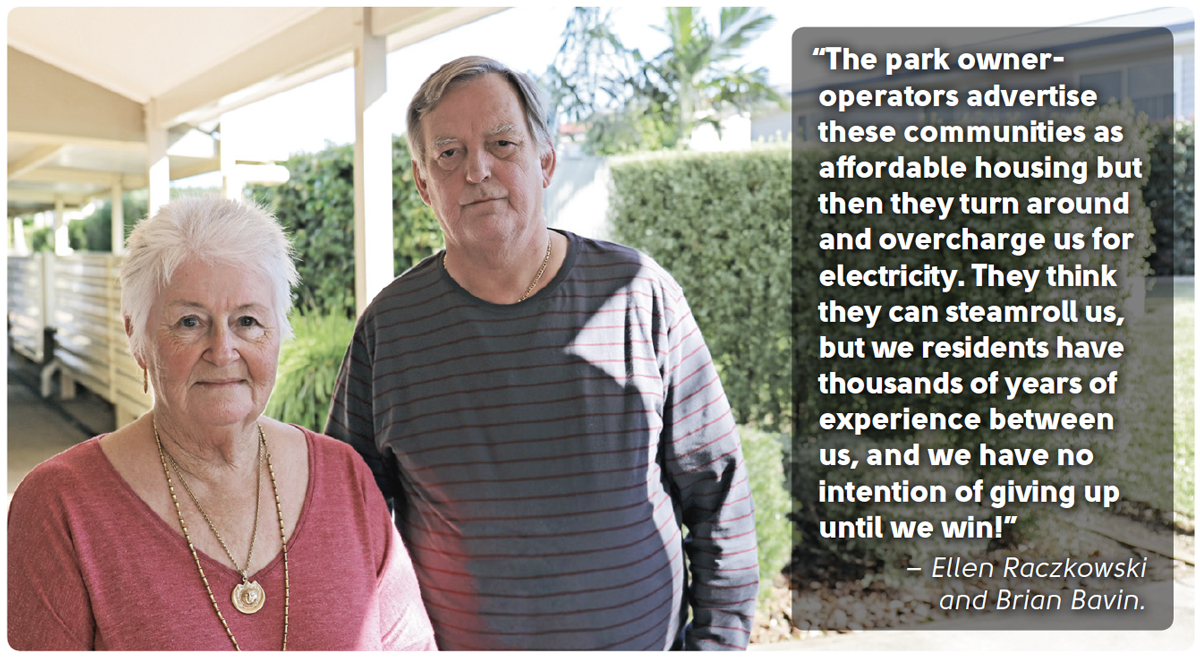 (Part of this article was previously published in Outasite Lite in April 2018.)

With the commencement of the Residential (Land Lease) Communities Act 2013 (the RLLC Act) on 1 November 2015, the method for calculating consumption charges for electricity, gas and water changed. The Tenants’ Union has published articles, a report and held discussions with home owners, Tenant Advocates, the NSW Energy and Water Ombudsman (EWON) and NSW Fair Trading to explain that operators should not and cannot charge more than they are charged by utility providers. 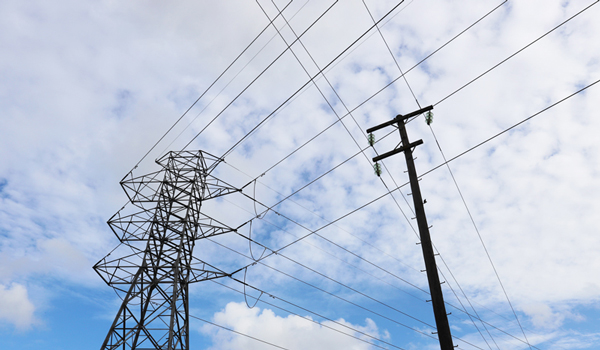 This is an important issue because the majority of operators purchase electricity at significantly reduced prices yet they charge home owners at the highest rate possible – the standing offer price published by the local area retailer. If home owners are charged correctly many would see considerable reductions in their power bills.

On the whole, since the RLLC Act commenced, operators have failed to change the way they calculate utility usage charges. Through Tenants’ Advice and Advocacy Services the Tenants’ Union has been advising and assisting home owners to take up the issue of electricity charges with operators. When negotiations failed to bring change, some home owners made applications to the NSW Civil and Administrative Tribunal (NCAT). Margaret Reckless was one of those home owners and when she received an unfavourable decision, she appealed.

Reckless v Silva Portfolios Pty Ltd t/as Ballina Waterfront & Tourist Park [2018] NSWCATAP 80 (Reckless) is probably the most important decision NCAT has made regarding the operation of the RLLC Act. The Appeal Panel made findings about utility usage charges and how the RLLC Act applies to site agreements signed under the repealed Residential Parks Act 1998 (Parks Act).

When an Act is repealed and replaced by a new Act, the new Act sets out how it applies to arrangements that existed under the old Act. Mrs Reckless signed a site agreement with the operator in April 2014 when the Parks Act was in force. The Appeal Panel heard competing arguments about how the Residential (Land Lease) Communities Act applies to that site agreement.

The Appeal Panel found the RLLC Act applies to the site agreement and that it applies despite the terms of the agreement. This is an important finding because it makes clear that electricity usage charges must be calculated according to the RLLC Act.

Having determined the site agreement is covered by the RLLC Act and that utility usage charges are therefore governed by section 77 the question for the Appeal Panel was the interpretation of section 77(3). It provides:

The operator must not charge the home owner an amount for the use of a utility that is more than the amount charged by the utility service provider or regulated offer retailer who is providing the service for the quantity of the service supplied to, or used at, the residential site.

It was argued on behalf of Mrs Reckless that the operator cannot charge more than their utility service provider charges them. In contrast, the operator argued that they could charge at the same rate as the standing offer price set by the local area retailer.

The Appeal Panel firstly noted that “although s77(3) is not drafted particularly well, it is clear that it is trying to prohibit overcharging of residents.” The Panel then said “The position is simply this – the Park Operator cannot charge Mrs Reckless for her consumption of electricity any more than it is being charged by Origin Energy.”

To put this in context, the operator was charging Mrs Reckless the Origin standing offer price of 26.62 cents per kWh. Origin was charging the operator between 4.21 and 6.23 cents per kWh, a difference of at least 20 cents for every kWh used by Mrs Reckless. Her bill for electricity usage in December 2016 was $44.19 but should have been around $10 or even less had she been correctly charged.

If you would like to read the full decision of Reckless you can find it on the NSW Caselaw website: caselaw.nsw.gov.au. Use the Advanced search function and search decisions of the Civil and Administrative Tribunal (Appeal Panel) using ‘Reckless’ as the case name.

NCAT will not determine how Mrs Reckless’ usage charges should be calculated until the Appeal has been decided.

The Supreme Court Appeal does not prevent other home owners from asserting their right to be correctly charged for utility use. Home owners can still make applications to NCAT about electricity charges but it is likely that NCAT will hold back on any decisions until the appeal has been determined. Home owners should be awarethat applications to NCAT must be made within certain time limits and those who delay endanger their refunds should the Tribunal determine they have been overcharged.

In an application brought by Robert Myles, which was heard in February 2018, NCAT handed down a decision on 1 May. Again NCAT found that s77(3) prevents the operator from charging more for electricity use than the operator is charged by the utility service provider. The parties have been asked for submissions on how the charges should be calculated.

In another case heard in May, NCAT decided that usage charges should be calculated using an averaging method. The operator was ordered to refund the home owner over $1,000 in overpaid charges. The operator has appealed this decision to the NCAT Appeal Panel.

On 8 March the NCAT Appeal Panel heard a dispute about electricity usage charges in the matter of Bavin v Parklea Operations Pty Ltd Trading as Gateway Lifestyle Stanhope Gardens [2018] NSWCATAP 24. The decision was published on 24 May and follows Reckless in the interpretation of s77(3). The Appeal Panel remarked “We are of the view that the reasoning in Reckless is applicable to the issues in this appeal, and we respectfully agree with and adopt that reasoning as to the application and interpretation of s77(3) of the new Act.”

“We commenced this fight almost a year ago on behalf of all of the 208 sites that are in the embedded network, we have no intention of giving up regardless of how difficult it may become.

We have to buy our power directly from the owner-operator – we don’t get a choice – and they don’t offer a senior’s discount like mainstream energy providers. They’re making a lot of money on-selling the electricity to us.

We only get 32 Amps. So on hot days in summer, when everyone wants to use their air-conditioners, we sometimes get power failures. It’s also not very energy efficient – because we have to use small air conditioners for a longer period, and there are no separate meters (let alone smart meters) so we don’t have much information about our individual energy usage.

A year ago the park owner increased the charge for electricity. We tried to talk to them about it but they wouldn’t reconsider, so we decided to take a stand. It’s been a long, slow process – we’ve been to the Tribunal 11 times now. It takes a lot of time to prepare the evidence. The Western Sydney Tenants’ Service was very helpful with advice and with wording our submission.

Most of the people in these villages are aged pensioners. Having read the Act, we believe it was not the intention of the legislators to allow owner-operators to make money from on-selling electricity to residents. The section is clunky, and needs to be clarified to stop pensioners from getting ripped off. We need the politicians to get onto this.

The best advice we can give to other residents is to get involved in the process. Contact your local Tenants Advice Service or the Tenants’ Union if you think you’re being overcharged. Talk to fellow residents and write to your local MP. The Australian public doesn’t like to see older folk being ripped off.” - Brian Bavin & Ellen Raczkowski, Stanhope Gardens residents

The Tenants’ Union believes the Tribunal and Appeal Panel have got the interpretation of section 77(3) right. However, as the Appeal Panel remarked in the Reckless case, section 77(3) is not drafted particularly well so we have now written to the Minister and requested an amendment that will provide clarity.

The Tenants’ Union has asked for the removal of the words ‘or regulated offer retailer’ from section 77(3). If this occurs, it will read:

The operator must not charge the home owner an amount for the use of a utility that is more than the amount charged by the utility service provider who is providing the service for the quantity of the service supplied to, or used at, the residential site.

The Tenants’ Union has also asked that a ‘note’ is added to the RLLC Act explaining the intention of the section and that the Minister issues a Ministerial Guideline explaining section 77(3)and advising operators that compliance is required.

We are also working with other organisations and home owners to raise awareness about electricity usage charges. It is an important issue that potentially affects up to 30,000 people. Home owners, resident committees and resident groups can take action - meet with, or write to your local MP or write to the Minster and let them know this is important and you want to be charged for electricity at the same rate the operator pays – as the law intended.