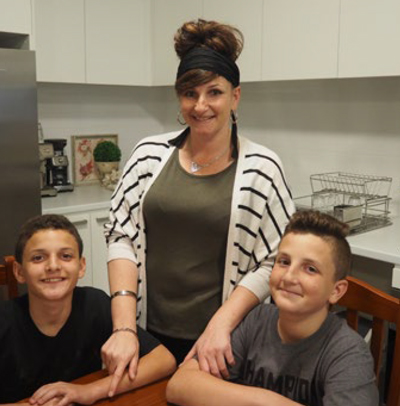 Clarissa and her twin teenage boys are tenants with St George Community Housing. They were over the moon to move into their new energy efficient, affordable housing home earlier this year.

“I have been renting for the past four years but paying rent in the private market has not been easy.

“Having a home that is affordable will make a big difference to our lives. It is exciting and is like a new beginning for us,” she said.

“I juggle a permanent part-time job in childcare with raising my two boys, who mean the world to me. It is important that I live close to work and the boys’ school and our new home is in a great location – everything is close by. I just want to do the best I can for my kids and I finally feel like I am able to achieve something. Being able to also save money on our energy bills will mean I can put money towards other things that the boys may otherwise miss out on,” she said.

Patrick can you tell me what led to SGCH starting on a program of making your properties more energy efficient?

SGCH put in place a sustainability strategy in early 2015. In the strategy there are a number of targets around energy efficiency, including: design benchmarks for our new properties; reducing energy costs, mainly electricity costs for tenants; reducing the amount of electricity they use from the grid; and also softer targets like improved comfort.

We were successful in getting a contribution of 50% of the total cost of the project from the NSW state government through the Office of Environment and Heritage with the rest coming through the Clean Energy Corporation.

What did the program involve?

There were two parts to the program, one focussed on properties we were designing and constructing and the other was retrofitting existing homes.

The largest measure by far in the retrofit was rooftop solar. We are  just about at the end and we will  end up rolling out about 700 roof-top solar PV systems on one and two bedroom social housing dwellings wired into the individual dwelling where the tenant will be the sole beneficiary while they are in the property. They may save from $300 to $500 per year on their electricity bill. We also switched over their hot water systems to on-the-ground heat pumps that use atmospheric conditions to heat the water. It’s super-efficient. We’ve also done  LED lighting, draft-proofing and we are about to begin the roll out  of ceiling batt insulation.

With the new builds there were two targets we were aiming for. The first was for two measures in the Nationwide Home Energy Rating System: improved window glazing systems and insulation in floors, in walls, in ceilings and also in basements in multi-story apartments. We also use ceiling  fans for poorer performing units  like apartments facing west.  The other measures were fairly similar to the retrofits. We looked at some hot water systems where it was appropriate. Because of the nature of the buildings which were tall and thin we put in common property solar power systems so the benefits will go to SGCH in terms of reducing operating costs for running lifts and lights and so on. There were a few other bespoke measures like window shading; it very much depended on the site. The first phase of the retrofit was wrapped up in June this year. Obviously new dwellings take longer to build so they’ll go through till 2018 and possibly into 2019.

How did you go about deciding which properties to retrofit?

Part of our broader plan is to retrofit our entire portfolio but we did have to make some hard decisions about which properties were in the first program. We took a cluster approach so if we were going to do improvements in an area we would have to do that entire area and not do salt and pepper because of tenant equity issues. We’ve probably retrofitted about a third of our portfolio.

Was there tenant input to develop & roll out the program?

We got tenant input in the retrofit part about the overall design of the program, how best to go about it for minimum impact and biggest benefit. The actual selection of which properties to retrofit wasn’t a process where we invited tenants to participate. We took a property portfolio approach, so we looked at which measures would work best on which property type – we have units, we have homes, we have town houses, we have high rises and certain measures won’t work on some properties. We did size certain systems based on the size of the household, so a hot water system would be sized appropriately to the number of household members and so would the solar system so we weren’t over-capitalising. The next time around we are going to look at testing a more direct tenant approach where we could look at an envelope of measures and an envelope of funds giving tenants a choice. Tenants could choose what they think are most valuable to them, and we’d look at expanding options like water savings devices and not just energy efficiency.

Did you do any tenant  education during the program?

Both funders required us to run a tenant education program. We ran workshops for each of the measures explaining what each was about and the benefits. Every measure had a letter and a FAQ in plain English about the process explaining the measure and the benefits. Tips about what tenants themselves could do were also interwoven into all the communications: put on a jumper, don’t put the heater on, turn the lights off when you leave the room, that sort of thing.