We launched the Make Renting Fair campaign at the beginning of July 2017 with 30 endorsing organisations. This has grown to more than 100 organisations. Reforming unfair evictions has also become a campaign point for the Sydney Alliance and the Everybody’s Home campaigns.

As more people are renting, and renting for longer, the need to make rental laws fairer has prompted fair renting campaigns in most states and territories. Renters don’t experience the same security and comfort in their homes as homeowners. Many are constantly worried about losing their home and feel powerless to assert their rights.

The Make Renting Fair campaign has succeeded in putting renters’ rights firmly on the agenda. In particular, the issue of unfair evictions has been established as a key concern in public debates around tenancy and housing.
Over the year, the Tenants' Union organised a range of actions and activities to advance the campaign including:

The Make Renting Fair website had 15,238 visits over the year, the Facebook page grew to 1,048 likes by the end of June 2018, and the Twitter account to 391 followers. For more about the campaign check out rentingfair.org.au 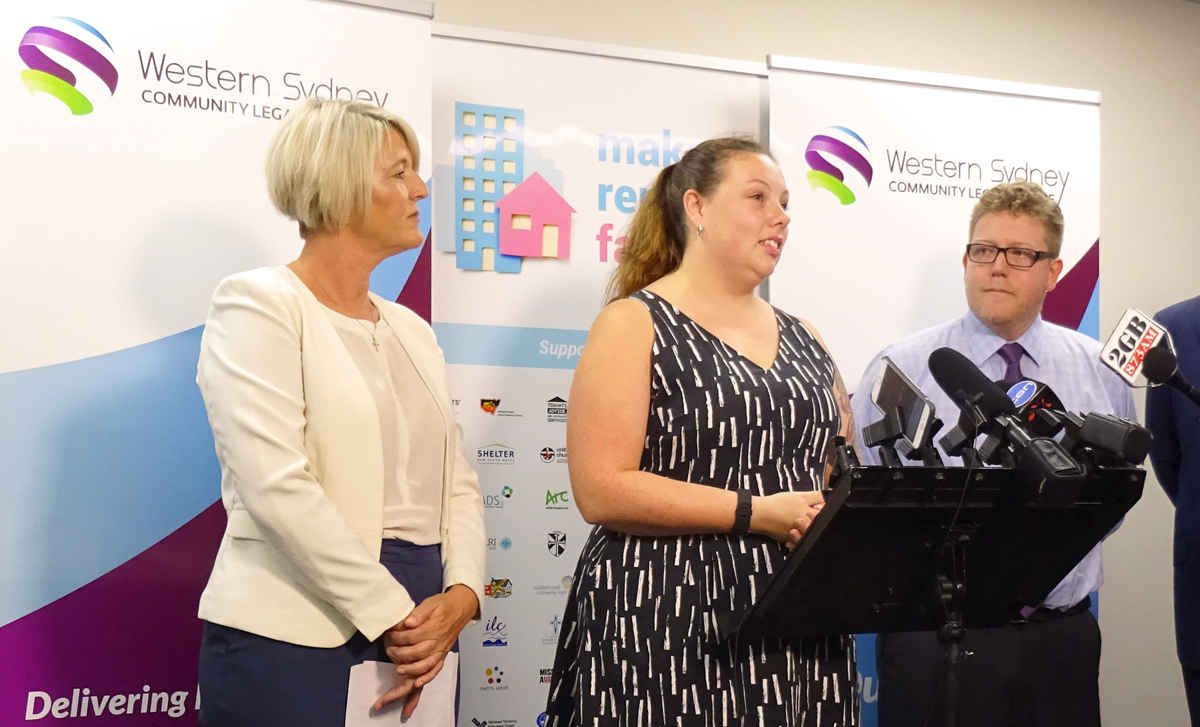 Kristy (pictured above, centre) is a tenant in Western Sydney. She publicly told the story of her unfair eviction as part of the Make Renting Fair campaign. Kristy is with Yasmin Catley MP (left, Shadow Minister for Innovation and Better Regulation and Member for Swansea), and Ned Cutcher (right, then Tenants’ Union Senior Policy Officer).

Kristy is a single mum with three kids, and she also cares for her own mum who has a disability. Kristy’s family had been living in their home in Oatlands for four years, but the house had a serious mould issue which had been recurring for over two years. The landlord sent tradespeople, but never solved the real problem despite repeated requests. They painted over the mould three times; it reappeared each time. During a storm, a massive leak caused extensive damage to Kristy’s furniture and belongings and meant that half of the house was uninhabitable for eight months. The landlord then demanded $3,000 from Kristy to pay for damages to the carpet! Eventually, after Kristy’s repeated requests for repairs, the landlord instead sent her a 90 day no grounds eviction notice. Kristy had to move right before
Christmas and her daughter’s birthday.

Luckily, Kristy found another home to rent. She also got tenancy advice from the Western Sydney Tenants Service, who assisted her to make an application to the NSW Civil and Administrative Tribunal for compensation, rent reduction and bond.

Kristy told her story at an event  in October 2017 to Labor MPs and media. Her story was featured by a number of news outlets, including Channel 7 and Channel 10. On the same day NSW Labor announced that they would commit to ending no grounds evictions.

Fair for Everybody event at NSW Parliament

In September 2018 the Tenants’ Union participated in a special event at NSW Parliament, organised by the Make Renting Fair and Everybody’s Home campaigns. The event brought together renters, housing academics, campaign supporters, and MP decision makers. The event was a success with over 80 attending to show support for the campaign, including dozens of MPs and advisers.

Keith (pictured speaking, above left), was one of the key speakers at the Fair for Everybody event. He’s a renter who’s lived in 7 homes over the last 10 years. He told the audience: “I am sick and tired of being forced to move. I’ve figured out that each time we move it has cost us around $3,000. No grounds evictions have totally disrupted my family’s life.”

Other speakers at the event included Dr Emma Power (Senior Research Fellow in Geography and Urban Studies at WSU), who spoke about her research on the experiences of older women renters, and Russell Rodrigo, a property investor, who spoke about how ending unfair evictions would be in landlords’ interests too – by fostering better relationships and improved stability.

Changes made to the Residential Tenancies Act

In October 2018, the NSW Legislative Council debated tenancy reforms. Disappointingly, an amendment that would have protected renters against unfair evictions was voted down. The Tenants’ Union views the Government’s failure to scrap ‘no grounds’ evictions as a significant missed opportunity.

However the Bill as passed does include important reforms and has made progress for renters in NSW.

Most significantly it introduces changes to the Residential Tenancies Act that make it easier for survivors of domestic violence who rent to leave a violent situation and end a tenancy without penalty. These important reforms are the result of strong campaigning and advocacy efforts led by Women’s Legal Service NSW.

The Government’s Bill also included good reforms that were not on the table at the start of the current review of tenancy laws, before the Make Renting Fair campaign was launched. These reforms include: