40 Years of the Tenants’ Union! 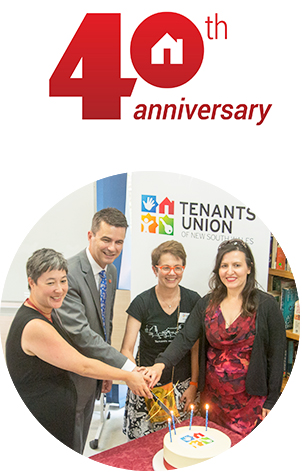 2016 marks 40 years of the Tenants’ Union. Four decades of working for tenants’ rights is no mean feat. A number of events were held to celebrate, and to recognise the thousands of volunteers, staff, members, board directors, funders and supporters who have contributed to the TU’s achievements.

We launched our anniversary celebrations on Thursday 11 February 2016 with a BBQ at Northcott Community Centre. TU staff wielded the sausage and onion tongs, salads were provided by the National Centre for Indigenous Excellence, and one hundred tenants, tenant advocates, community supporters and dignitaries came along. Formal congratulations from the NSW Government were given by Shayne Mallard, MLC, representing Brad Hazzard, Member for Wakehurst and Minister for Social Housing.

We asked the three Members of Parliament to help Julie Foreman, Executive Officer of TU, to cut the cake.

We also asked each of them to tell us about their experience of tenancy issues. Check out The View from Macquarie Street:

“If we want to live in a fairer society where people feel valued, we have to make sure that our nation’s housing meets people’s needs rather than just boost the profits made by wealthy investors.” – Professor Keith Jacobs

We held a forum and party on 15 August 2016, just two days shy of the actual date of our founding (17 August). Redfern Town Hall was packed with tenants, advocates past and present, founding members of the TU, and representatives from organisations TU works with in the housing and homelessness sectors.

Victor Dominello, Minister responsible for Fair Trading, gave the opening address in which he acknowledged the significant contribution the TU has made to tenancy law reform for 40 years.

Aunty Millie Ingram gave the Welcome to Country. Zoë Norton Lodge of the ABC consumer watch television program The Checkout mc-ed. Entertainment during the forum was MissJudge, skit by ‘Agents for Social Change’, a social housing tenant group from South West Sydney, on the power of words we use and their impact
on tenants.

The party which followed was a great chance for 40 years of workers for tenants’ rights to catch up and swap stories, enlivened by a set of housing themed songs from Lady Sings it Better.

Getting the word out: 40 moments

We created a Facebook gallery of 40 moments in TU and tenants’ rights movement history. We published a special edition of Tenant News. Two websites were launched – the revamped tenants.org.au and thenoticeboard.org.au, a specialist website for residential park residents.

My house, my home

We produced My House, My Home – a documentary to celebrate our 40 years of tenant activism, showcase our work today, and outline the work still before us. Check out the short version or the full documentary below.

We look forward to your support for at least another 40 years!